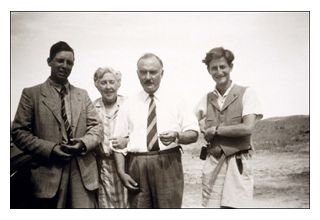 It is with a real sense of loss that I bring to you news of the homecalling on Tuesday of Professor Donald Wiseman (1918-2010) OBE DLit FBA FKC FSA, who played a vital role in the early development of the Tyndale House and Tyndale Fellowship and made a massive contribution to our work, to biblical scholarship, and to the study of the ancient Near East. There will be a private funeral, but we anticipate that a public memorial service will be arranged later in the year. Below you will find a tribute by Professor Alan Millard, followed by some highlights I found in his autobiography. Professor Wiseman was predeceased by his dear wife Mary and is survived by three daughters Gillian, Mary and Jane. He will be much missed.

Left to right: Donald Wiseman stands next to his good friend Agatha Christie, her husband Max Mallowan, and Neville Chittick, while carrying out archaeological excavation at Nimrud.

Professor Donald Wiseman (1918-2010)
The passing of Donald Wiseman on 2nd February, 2010, marks the end of an era in the story of Tyndale House and the Tyndale Fellowship. After a year reading history at King’s College, London, W. J. Martin persuaded him that study of the biblical world and its languages would be more valuable to the church and biblical studies, so he turned to Hebrew and Assyriology. Martin had been the major stimulus in the creation of Tyndale House and Donald Wiseman saw its strategic potential. He gave much time and thought to the affairs of the House, serving as Chairman of the Biblical Research Committee, which had the initial responsibility and of the Tyndale House Council, which inherited it, from 1957 to 1986. As Chairman of that and other committees, he guided discussion with wisdom, patience and humour, ensuring sensible decisions were made. When there were doubts in UCCF (then IVF) circles about continuing financial support, he insisted that the House was providing a service which no other evangelical institution offered and had potential for much more. When problems of space for the Library arose, it was Donald who suggested the annexe which was built as The Hexagon in 1984.

He saw the priority for Tyndale House lay in biblical research, supplying positive information and arguments to oppose widely taught liberal views about Scripture. His vision was well expressed by John Stott in 1992, ‘We shall never capture the church for the truth of the gospel unless and until we can re-establish biblical scholarship, hold (and not lose) the best theological minds in every generation, and overthrow the enemies of the gospel by confronting them at their own level of scholarship’ (Quoted by Tom Noble, Tyndale House and Fellowship, 239).

Like Martin, Donald Wiseman was a great enthusiast and encourager of others, in Britain and abroad. He chaired the Tyndale Old Testament Study Group from 1951 to 1981, taking time and trouble to find young scholars whom he could introduce to the Group so that they would know there were others who could support them in their often lonely  research. The Bible is a product of the ancient Near East, so he recognized that it should be read and assessed in the light of knowledge about that world. With that in mind, aware of the value of the archaeological contexts of ancient artefacts, he set up the Tyndale Biblical Archaeology Study Group in 1958, which, although not functioning regularly in recent years, brought together linguists and archaeologists to evaluate and apply new and old discoveries to biblical studies. On his initiative papers were brought together as Notes on Some Problems in the Book of Daniel (1965) and Essays on the Patriarchal Narratives (1980) and he stimulated other publications by fellows of Tyndale House (e.g. David Tsumura, The Earth and the Waters in Genesis 1 and 2, 1989). A volume of  essays by members of the Old Testament Study Group was dedicated to him in gratitude for his many years of devotion (R. S. Hess, G. J. Wenham. P. Satterthwaite, eds., He Swore an Oath (1994).

His experience and knowledge marked Donald as a major contributor to, and Editor of, the New Bible Dictionary (1962, 1982, 1996) and The Illustrated Bible Dictionary (1980). For many years he was Editor for Tyndale Old Testament Commentaries and gave his skills to a variety of other Christian publications.

Donald was always ready to help a cause he thought would be fruitful in the service of his Saviour, preaching and teaching and holding informal groups for Bible Study. The number who faced the claims of the Gospel through meeting him cannot be told, neither can the number whose lives and careers he has influenced or guided.

As one of the latter, I give thanks for his life, his service and his fellowship.

Select gleanings from the privately published book Donald J. Wiseman, Life Above and Below: Memoirs (2003).
Donald Wiseman led an extremely active and full life and it is not possible to summarize all of this. However, I thought that I would at least pick out a few of many highlights from his autobiography relating to his service in the Second World War:
– PA to Air Vice-Marshal Keith Park, who was in charge of the Fighter Group responsible for the defence of S.E. Britain during the battle of Britain, and often finding himself on the phone to Winston Churchill
– trusted to handle large amounts of information from the Ultra Secret source known as Enigma
– chosen to carry maps and plans for first fighters to fly in to Algiers in Operation Torch
– plane crash in Sicily in which he temporarily lost the use of both legs
– recovery to play significant role enforcing German surrender in N. Italy

Here is the text of his citation for the USA Bronze Star Medal (emphasis added):

“Donald J. Wiseman, O.B.E., Wing Commander, Royal Air Force, Headquarters Mediterranean Allied Tactical Air Force, for meritorious achievement in connection with military operations in the Mediterranean Theater of Operations from 1 March 1943 to 22 June 1944. As Chief Intelligence Officer, Mediterranean Allied Tactical Air Force, Wing Commander Wiseman displaying a rare analytical and organizational genius was responsible for the creation and development of an Intelligence Force headquarters in the Mediterranean Theater. Upon the Intelligence material gathered through his selfless and earnest work, this Headquarters was able to plan and launch the air operations which brought victory to the Allied Armies in Italy. His brilliancy in collecting and evaluating the necessary operational Intelligence data, his ability to work smoothly with an integrated American and British staff, and his unstinting fulfillment of duty reflect the highest credit upon himself and the Armed Forces of the Allied Nations.”

Of the several hundred books and articles that I have worked on over the last few years there is one that stands out to me: Kenneth E. Bailey, “Informal Controlled Oral Tradition and the Synoptic Gospels,” Asia Journal of Theology 5 (1991): 34-54. = Themelios 20.2 (1995): 4-11. Writing with the unique insight into Palestinian…

I have updated my brochure introducing Theology on the Web to reflect the latest developments. You can download a copy here. Please pass on a copy to anyone whom you think would be interested in supporting this ministry. The priorities for the rest of the year are: Continuing to focus on uploading high quality theological…

This Christmas I will be uploading 12 Bible quizzes from the magazine Sunday at Home first published in 1889. One question will be placed on my blog each day and the answer the next day in the comments. My wife and I enjoyed trying to answer them and we hope you do to. You may…

This is an exegetical commentary on the Letter of James by Richard John Knowling, Professor of New Testament at King’s College, London. My thanks to Book Aid for making a copy of this public domain book available for digitisation. Richard John Knowling [1851-1919], St James with an Introduction and Notes. Westminster Commentaries. London: Methuen &…

2010 has been an extremely busy year for the Theology on the Web websites, with a noticeable development from placing individual articles online to placing whole journals online as well. The following journals are now avialable on-line for the first time. The current  incompleteness of some of these journals is an indication of how difficult…

I am delighted to say that after five years unique visitor numbers to www.biblicalstudies.org.uk have exceeded 31,800 in one month for the first time. More significant than this figure to me is the fact that the site is being viewed and used in 129 different countries, achieving my aim of making the material it hosts…