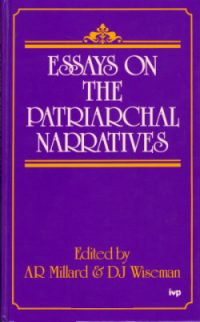 The Patriarchs in Scripture and History - John Goldingay

Archaeological Data and the Dating of the Patriarchs - John J. Bimson

The Religion of the Patriarchs - Gordon J. Wenham

Diversity and Unity in the Literary Structure of Genesis - David W. Baker

Today there is renewed interest in the history and traditions of the patriarchal period. Recent publications have sought, among other things, to show that the biblical patriarchs were a literary, even fictional, creation of the first millennium BC, produced to provide the nation of Israel, which came into prominence only then, with 'founding fathers'. Much of this new writing is helpful in distinguishing what are traditional or speculative interpretations from the basic text of Genesis. Sometimes archaeological evidence has been adduced in support of the historicity of the patriarchs and their cultural background in the second millennium BC which can no longer be sustained. Sometimes, however, the value of such evidence is ignored or belittled.

In the light of the importance of this subject for the proper understanding of the historical reliability and the theological teaching of the Bible (which cannot be separated), the Council of Tyndale House set up an Old Testament project group to look afresh at aspects of the problems raised. These essays are the first fruits of its work. We are grateful to all who have supported the research and to those scholars who have given time to it.

Since such studies depend largely on the validity of the methods of study, this matter has initial place. Attention is given also to matters of tradition-history and structural analysis of the text. The essays review past work and attempt, in their various ways, to break new ground and stimulate further study. They aim to make a positive contribution, not merely to criticize the works of other writers. Each, necessarily, reflects the views of its own author, rather than of the contributors as a whole.

These essays are offered in the context of a continuing debate, yet with the hope that they will prove of interest and help to many concerned with a subject of absorbing historical and theological importance.