1. This verse describes a journey very unwillingly undertaken.
2. The unwilling traveller was one of a large company, but he parted from all his companions on arriving at his destination.
3. When he returned the same way it was on a sad errand, and with a large attendance.
4. People of three different nationalities are mentioned in the verse.
5. One of the persons named makes enquiry afterwards for “men of activity.” He had very large property in land.
6. Another, who was very handsome, once made use of this expression, “Am I in the place of God?”
7. A business transaction is described in the verse.
8. A military office of some importance is also mentioned.
9. One of the persons named, though a heathen, received “the blessing of the Lord” on his house.
10. Some of the people mentioned had just come from a country named in Jer. viii.; their great ancestor had been promised Divine blessing and God was with him as a child. He had married a wife from the country named in this verse and his sons had towns and castles.
11. Quantities of golden earrings were taken, years after, from the descendants of these people.
12. The country spoken of is compared by Jeremiah to “a very fair heifer.” The same prophet also threatens the destruction of its idol-temples with fire. Isaiah prophesies woe to it, but foretells that in the end its people “shall know the Lord.”
13. The grandfather of one of the persons named in the verse was forbidden to go into this country.
14. The verse is the first in a chapter, and contains thirty-three words, six being proper names.

Answer in the comments tomorrow.

Earlier this year Tyndale House library kindly gave me their set of the Journal of the Transactions of the Victoria Institute. I have digitised volumes 1-10 (1866-1876), 44-89 (1912-1957) and uploaded those articles that I can demonstrate either to be in the public domain or have obtained permission to use. You will find the full…

Scripture Enigma No. 1 1. This was sent by David to Joab; was spread out before the Lord in prayer by Hezekiah; was sent out in great numbers by Ahasuerus, first to condemn a nation and then to reverse that command. 2. One of two brothers who drove the oxen when the Ark of God… 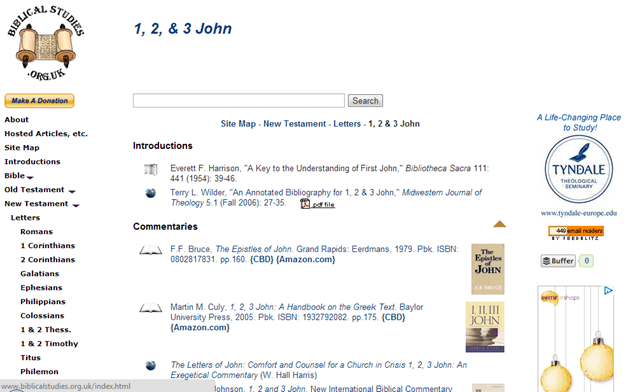 Regular visitors will have noticed that some of the pages on the BiblicalStudies website have changed their appearance. For various reasons it has become necessary to begin to roll-out a new page design: The current design has not been changed in 11 years and looks its age. The pages are based on old-fashioned tables based…