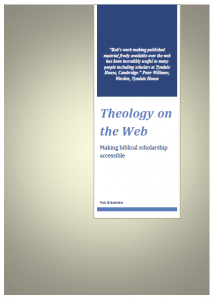 I have just updated my introductory brochure for Theology on the Web to reflect recent developments, including:

Day One of the BETH (Bibliothèques Européennes de Théologie) Conference in Oxford concluded with a tour of the Wycliffe Hall Library, which is hosting the event. Wycliffe Hall is a permanent private hall of the University of Oxford which has about 150 students each year. Its library contains around 30,000 books suitable for students up…

Most of the articles from the 2012 edition of the Evangelical Quarterly are now available for free download in PDF. My thanks to the authors for their kind permissions. On 3rd February 2011 Spurgeon’s College hosted a debate on the topic of ‘Is Universalism an Evangelical Option?’. The first issue (Vol. 84.1) has the papers…

What are the Whitley Lectures? The Whitley Lecture was first established in 1949 in honour of W.T. Whitley (1861–1947), the Baptist minister and historian. Following a pastorate in Bridlington, during which he also taught at Rawdon College in Yorkshire, Whitley became the first Principal of the Baptist College of Victoria in Melbourne, Australia, in 1891….

I have just uploaded the following article in PDF: Edwin M. Yamauchi, “The reverse order of Ezra/Nehemiah Reconsidered,” Themelios 5.3 (1980): 7-13. Many thanks to Professor Yamauchi for his kind permission to reproduce it on-line.

This site uses Akismet to reduce spam. Learn how your comment data is processed.