Thomas the apostle has received relatively little interest in western theology. I knew from friends who came from Kerala in India that Thomas plays a much more important role in their thinking. It is a great pleasure to host an interview about a new book on Thomas which demonstrates his importance in both the New Testament and in the early church.

(1) Why did you choose Thomas’s character as your topic for post-doctoral research?

Rob, it is an interesting question. Thomas was a fascinating character right from the beginning of my life in Kerala, India. In tradition, Kerala was well known as the land of Thomas and Thomas Christians. The following are some of the other reasons facilitated my thinking further: first, as a person who was born in a Saint Thomas Syrian Christian family, we always cherished his traditions and that further created in me a sense of identity as a Thomas Christian; second, my learning related to Saint Thomas in the Bachelor of Divinity (BD) and Master of Theology (MTh) classes under Senate of Serampore College, especially both in favor of or against the views of his coming to India, inspired me to advance in this field of study; third, my second Master of Theology (ThM) degree in Princeton Seminary, USA, was a good time to facilitate interactions and discussions with a reputed Thomas scholar Prof. James H. Charlesworth who motivated me to take up this topic seriously; fourth, the classes on John’s Gospel under Prof. George L. Parsenios enabled me to understand the complex character of Thomas in the Fourth Gospel; and fifth, as a PhD student at Radboud University Nijmegen, Holland, I was continually inspired by the Center for the Study of Oriental Christianity to take initiative in the field of Thomas studies.

These reasons were enough to continue in my thinking about the character of Thomas and Thomas Christianity. The inspiration and fellowships I received from Global Research Institute (GRI) of Fuller Theological Seminary, Foundation on Judaism and Christian Origins (FJCO), and Center for South Asian Research (CSAR) also inspired me to take up the challenge. I thank Union Biblical Seminary administration for giving a year-long sabbatical for the successful completion of the research.

(2) How do your views deviate from the popular understanding of Thomas’s character? Do you think that Thomas is a synonym for doubt and unbelief?

Thomas appears as one of the most misunderstood characters from the early stages of New Testament history and interpretation. The nickname ascribed to him, “doubting Thomas,” is mostly accepted as a synonym for doubt, unbelief, and lack of devotion. The usual practice of studying the character of Thomas from the New Testament, apocrypha, and historical traditions independently has kept interpreters from reaching a broader understanding of the character. The limitation of studying the character of Thomas independently within the limits of canonical, extracanonical, and historical disciplines has created gaps within Thomas studies. This situation persuades us to review the Thomas Literature integratively to understand the character from a broader purview.

The present book addresses the following questions: Was Thomas merely a “doubting Thomas” or was he a “believing Thomas?” How will a study of Thomas that bridges New Testament, apocrypha, and historical traditions provide a broader understanding of the character? How is a disciplinary perspective limited in its scope in the study of Thomas, and can an interdisciplinary perspective enable us to perceive the character comprehensively? How was Thomas connected to Eastern Christianity and how does the Thomas Literature support this link? Can we understand the Thomas traditions related to Judea, East Syria, Persia, Indo-Parthia, and South India with the help of canonical, extracanonical, and traditio-historical documents? These questions must be dealt with adequately in the process of exploring the Thomas Literature. Thus, the task of the study is threefold: to investigate the development of the Thomas Literature from the earliest stages, to understand the peculiar approaches and methodologies of interpreting Thomas documents, and to analyze the Thomas Literature integratively to understand the character and his mission involvements.

(3) Why did you choose the title “Saint Thomas the Apostle: New Testament, Apocrypha, and Historical Traditions?”

The book has a structure of its own and it incorporates views from the New Testament, especially Johannine, understanding of Thomas, his appearance in the apocryphal documents, and the widespread understanding of his person and work in the historical traditions. In view of that, the 10 chapters of the book are divided under three parts. In Part One (chapters 1-4), the study foregrounds the character of Thomas within the framework of John’s Gospel through a narrative-critical analysis. In this section, I trace how Thomas appears in the four episodes of the Gospel (11:16; 14:5; 20:24-29; 21:2) and how the explicit and implicit aspects of the Gospel together bring his character into the limelight. Part Two (chapters 5-8) throws light on how Thomas appears in The Gospel of Thomas (GTh), The Book of Thomas the Contender (BTh), The Acts of Thomas (ATh), and The Infancy Gospel of Thomas (IGTh) and how the apocryphal documents further advance the Johannine portrayal. Part Three (chapters 9-10) investigates how the historical traditions can be integrated together to build further upon the canonical and extracanonical details. Chapter 10 attempts to reconstruct a history of the person and work of Thomas by combining the perspectives from the Synoptic Gospels, the Fourth Gospel, the Book of Acts, the apocryphal documents, the traditions from the church fathers, the communitarian perspectives, and the traditions of the Thomas Christians. In the conclusion, I signal how a comprehensive understanding of Thomas becomes possible through a scientific reading of all these materials.

(4) What methodological principles did you adopt in this research? Why you consider the research to be interdisciplinary in its approach?

This monograph is an attempt to expound a holistic understanding of the person and work of Thomas combining the information about him in the New Testament, the so-called apocrypha documents, and the traditional-historical materials. The task, therefore, is to identify how Thomas is perceived in the Thomas Literature. I take up this research with a hope that a dynamic interwovenness of the three major layers of documents and traditions provide an overview of his personality. In order to achieve the expected goal, I treat the character of Thomas following an integrated dynamic of interpretation. Reconstructing a history of the character based on the literary, historical, and theological highlights of the Thomas Literature will enhance the scope of the study. Furthermore, the study will explore the conceptualization of the Twin motif and the significance of the two monuments such as the living tradition of Malabar and the tomb of Mylapore. In short, the study is an attempt to implement an interdisciplinary analysis as an overarching approach to pull things together in understanding the overall picture of Thomas’s character. This analysis contributes to the advancement of a thorough interpretation of the identity of Thomas both as a literary character and as a historical figure.

Thomas traditions in John and in the so-called apocryphal works, like the GTh, BTh, ATh, and IGTh, have long been misunderstood. They have been explained from the perspective of Jesus’s disciples who went to the West, especially to Rome. The so-called apocryphal documents were composed long before there was any canon of the New Testament, and they must not be branded as ‘non-canonical.’ The present monograph examines all the traditions focused on Thomas from an interdisciplinary perspective. The insights and conclusions have proved surprising and challenge the well-known claim that there is no history in some of these very early traditions.

(5) What does your book conclude about the popular view that Thomas is “the Apostle to the East?”

The last two chapters provide us with an overview of the Thomas documents from geographically vast areas over a chronologically extended period of time. The details regarding Thomas outlined in the Johannine and the apocryphal documents are further substantiated by the traditions from the church fathers, historians, travelers, and geographers. Chapter 9 concludes that India had a well-established trade relationship with the rest of the world, even before the beginning of Christianity. Hence, India was not a terra incognita for outsiders during the post-resurrection period. Furthermore, we can now expound how Thomas’s apostleship to India was unanimously accepted, consistent, and reasonably early. As Thomas’s Indian apostolate was acknowledged over a longer period of time and there were no convincing contradictory views, it continues to remain as an accepted view in historical documents of the church. Chapter 10 further demonstrates how we can reconstruct a history of Thomas based on New Testament, apocrypha, and historical traditions. Based on all the arguments from canonical, extracanonical, and traditio-historical documents, I attempt to understand Thomas from an Eastern point of view.

Finally, thank you Rob for all these interesting questions concerning my book on Thomas. 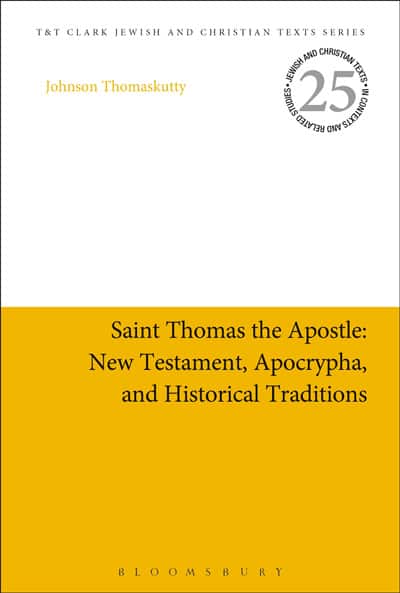 Here at the details of the book:

Author: Dr. Johnson Thomaskutty is Head of the Department of New Testament and Christian Origins at Union Biblical Seminary, Pune, India. He is author of “Dialogue in the Book of Signs: A Polyvalent Analysis of John 1:19-12:50” (Biblical Interpretation Series 136; Leiden/Boston: Brill, 2015). His forthcoming monograph is entitled “Saint Bartholomew the Apostle: New Testament, Apocrypha, and Historical Traditions” (Fortress Press).