Learn to Sit, Walk and Stand: Paul's Message to the Church at Ephesus
Robert I Bradshaw

The History of the Church at Ephesus 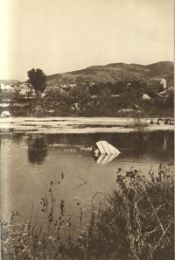 It was no accident that Paul visited Ephesus. Capital of the province of Asia Minor and an important sea port and commercial centre this city was the logical place to establish a church. From here the Message would spread outwards to the neighbouring cities as people came and went on business and pilgrimage - because the city was also home of one of the Seven Wonders of the Ancient World - the temple of fertility goddess Artemis to whom the city was dedicated. The statue of Artemis that it housed was probably made (at least in part) from a meteorite, which explains the comment made about in Acts 19:35).[1] We perhaps know more about the history of the church in Ephesus than about any other mentioned in the New Testament. From these we learn how it was founded by Paul, how he left Timothy there to continue the work and finally we have the letter sent to the church by the Lord Himself through the Apostle John. (Acts 18:19-28; 19:1, 17-20; 20:16; 1 Cor. 15:32; 16:8; 1 Tim. 1:3; 2 Tim. 1:18; Rev. 1:11; 2:1-7). Church history informs us that this was the last place of ministry and burial of the beloved disciple, John.[2]

Paul first visited Ephesus during his second missionary journey (Acts 18:19). As was his custom Paul went first to the Jewish Synagogue to bring the Message about Jesus to his own people (13:14; 14:1; 17:1-2, 10, 17; 18:4). He did this for both theological and practical reasons. The Message had to be preached first to the Jews because they were God's covenant people (Rom. 1:16). They would be the one with whom had most in common and have the least amount of difficultyer they settled they formed a distinct community centred around a synagogue. Gentiles, attracted by their strict ethics learned first hand what faith in the Living God was. Many (especially women) became converts to Judaism (or proselytes), the men accepting circumcision. Outside of this group were those, known as "God-fearers" who were either unwilling or considering taking this final step. They too were familiar with the Old Testament and could be relied upon to give Paul a fair hearing.. As a visitor it was customary for him to be asked by the synagogue ruler to share a few words of greeting, and this offer Paul always accepted with relish. Inevitably those Jews who rejected Paul's teaching about Jesus had him put out of the synagogue and Paul would then turn to the Gentiles, building on the contacts he had made among the proselytes and God-fearers.

Such a pattern was repeated at Ephesus: Paul was allowed to speak at the synagogue for three months (19:8), after that he was thrown out and held discussions at the lecture hall of Tyrannus for the next two years (19:9-10). Luke reports that during this time the Message spread throughout the province of Asia (19:10)- testimony to Paul's ability under the anointing of the Spirit and his choice of location (mentioned above). Eventually opposition arose from another source, stimulated by financial (Luke implies - 19:24) as much as religious reasons - from the silversmiths of Artemis (19:23-41). It is worth noting that even though Paul knew of the temple of Artemis, he did not preach against it directly (19:38), despite the accusations of his opponents to this effect (19:26). He only spoke against idolatry in general. The ensuing riot forced Paul to leave the city and although we know he never visited it again personally he never forgot about those he left behind. Paul passed by Ephesus on his way to Jerusalem and called upon the elders of the church to meet with him in Miletus (Acts 20:16-38). From this passage we learn more about the Paul's ministry in Ephesus, including the fact that he had spent a total of three years ministering in the city.

Timothy was left in Ephesus to deal with false teaching and appoint Godly leadership in the church. There appear to have been several false teachings that Paul and Timothy faced in Ephesus and in Asia Minor generally. Although we know little of the details they appear to have included some kind of special "revelation knowledge" - a new revelation considered to be of equal value to Scripture (1 Tim ; 1:3-4; 5:20), asceticism (4:3-4), and myths (1:4). One particular false teaching was that the resurrection had already taken place (2 Tim. 2:18), possible an example of the belief that all the benefits of the coming age are available to believers now.


Letter to the "Ephesians" 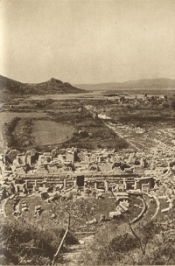 As stated above, we know a great deal about the church at Ephesus from the New Testament. We should be cautious, however, before we read too much of this information into Ephesians, because it is probable that the letter was originally intended for a wider audience than just the church at Ephesus. There are two lines of evidence that support this statement: (1) internal evidence from the letter itself, and (2) textual evidence from the surviving Greek manuscripts. The internal evidence is straightforward. In Eph. 1:15-16 Paul states that "ever since I heard about your faith in the Lord Jesus and your love for all the saints, I have not stopped giving thanks for you, remembering you in my prayers." This , as well as 3:2 and 4:12 all strongly suggest that he did not know the people he was writing to, and imply that he was not directly responsible for them coming to know the Lord. The readers Paul has in mind have clearly heard of him, but indirectly through others. This could not be said of the church in Ephesus where Paul laboured tirelessly for three years. The letter also lacks the detailed list of personal remarks that Paul usually included at the end of his letters (cf. Romans 16:1-24; 1 Cor. 16:5-18; Phil. 4:2-19; Col. 4:7-17; 1 Thess. 1-3; Philemon). In this it is similar to Galatians - itself a general letter to the church "in Galatia".

The textual evidence concerns two words in Ephesians 1:1 "in Ephesus". These are missing from the earliest manuscripts and are most likely to have been added later to the text. Many possible scenarios for the letter's origin have been suggested,[3] but it seems to me most likely that the letter was originally intended to be a circular letter for several churches in Asia Minor (including those at Heiropolis and Laodicea) sent first to Ephesus with Tychicus, who also delivered the letter to the church at Colosse (Eph. 6:21-22; Col. 4:7-9). From here copies of the letter were made and distributed to the churches. With time the letter became associated primarily with the church in Ephesus and the two extra words added to verse 1. This solution also takes account of the personal remarks made by Paul (6:21-22) which are directed to the believers in Ephesus.


Analysis of the Letter

Date The letter is thought to have been written near the end of Paul's life during his imprisonment in Rome at the same time as he wrote Colossians and Philemon. This places it in the early 60's AD.

Prayer wish For this reason, ever since I heard about your faith in the Lord Jesus and your love for all the saints... (1:15-23)