STEP software is designed especially for teachers and preachers who don’t have access to resources such as Tyndale House Library, which specialises in the biblical text, interpretation, languages and biblical historical background and is a leading research institution for Biblical Studies.

The web-based program, which will soon also be downloadable for PCs and Macs, will aid users who lack resources, or who have to rely only on smartphones or outmoded computers.

The project began when STEP director Dr David Instone-Brewer created the Tyndale Toolbar for his own use. It became popular among researchers at Tyndale House and is now used by thousands of people across the globe. The Beta launch of STEP invites users to try out the new tools and give suggestions for improvement.

“STEP represents the most comprehensive yet user friendly tool for Bible Study I have seen in over 35 years of research,” said Dr Wesley B. Rose. Tim Bulkeley, a contributor to the project, said “I wish I was just starting to teach in Kinshasa now, with STEP and a smart phone. Students would find learning Hebrew and Greek, to read the Bible directly, so much easier.”

Almost a hundred volunteers worldwide have contributed to this work, including 75 who helped to align the ESV, used with the kind permission of Crossway, with the underlying Greek and Hebrew. All their work will now be freely available for other software projects. There are many exciting features in the pipeline for others to get involved with.

Try it out at www.StepBible.org.

The special problems of the Majority World have inspired some unique technical solutions. The whole database-driven program is designed to be downloaded onto computers as diverse as decade-old desktops and Android phones. This download, which is still being tested, enables it to continue working when internet access goes down.

Ten language interfaces are available and another 83 are ready for volunteers to work on. Bibles in many languages are already present and agreements are in place with the United Bible Societies and other organisations to add hundreds more. Someone using a Swahili browser can see buttons, menus and Bibles in their own mother-tongue.

Some of the features are unavailable on any other software, and the ease of use belies its extraordinary complexity. Even in Basic View you can get answers to questions like: Which other verses use the same original word found here? This works for every Bible in all the available languages without requiring knowledge of any Hebrew or Greek. In Advanced View one can see multiple interlinear texts with word-by-word alignment in English, Chinese, Hebrew and other languages. Information about grammar and dictionaries is also given at three levels so that someone wanting quick information isn’t overloaded with the complex details, which are also available.

I am very pleased to be able interview Dr David Instone-Brewer about Tyndale House’s S.T.E.P. Project – an initiative that I have been indirectly involved with for several years. In the video below David introduces the Project: Interview Thanks David for agreeing to be interviewed about the STEP Project. First of all, can you tell…

Accurate STEPBible data is now freely available.  Tyndale House has decided to release their  STEPBible data on a more flexible public licence to make it easier for other free Bible projects to build on accurate information about the Bible text. Inaccurate data can lead to errors and public humiliation – as I’ll describe below. The… 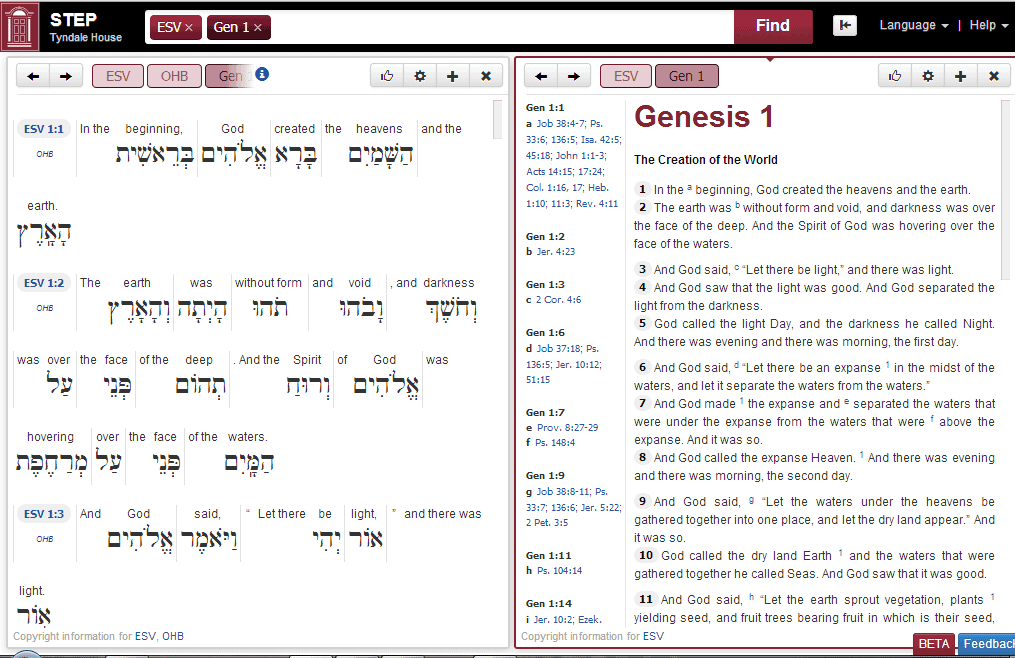 Many Christian scholars from overseas who have spent time studying in the UK return to their own countries find their ministry of training others to understand the Bible frustrated. This is because the in-depth Bible Study resources, so readily available in universities in the UK, are now out of their reach – both physically and…