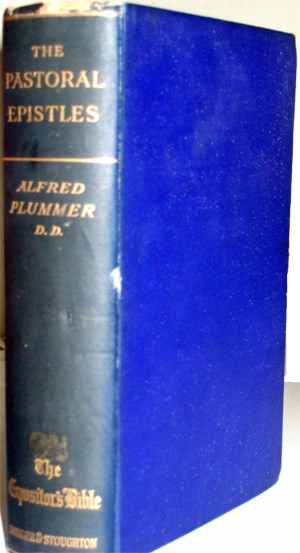 The commentary on the Pastoral Epistles by Alfred Plummer in the Expositor’s Bible Series is now available for free download in PDF.

Chapter I – The Character and the Genuineness of the Pastoral Epistles

Chapter II – Timothy the Beloved Disciple of S. Paul – His Life and Character

Chapter IV – The Moral Teaching of the Gnostics.-Its Modern Counterpart

Chapter VI – The Prophecies on Timothy. – The Prophets of the New Testament an Exceptional Instrument of Edification

Chapter VIII – Elements of Christian Worship: Intercessory Prayer and Thanksgiving – The Solidarity of Christendom and of the Human Race

Chapter X – The Origin of the Christian Ministry: Various Certainties and Probabilities Distinguished

Chapter. XII – The Relation of Human Conduct to the Mystery of Godliness

Chapter XIII – The Comparative Value of Bodily Exercise and of Godliness

Chapter XIV – The Pastor’s Behaviour Towards Women – The Church Widow

Chapter XVIII – The Epistle to Titus – His Life and Character

Chapter XXVII – The Character and Contents of the Last Epistle of S. Paul – The Nemesis of Neglected Gifts

Chapter XXXI – The Power of a Belief in the Resurrection and the Incarnation – The Gospel of S. Paul

Chapter XXXII – The Need of a Solemn Charge Against a Controversial Spirit, of a Diligence Free From Shame, and of a Hatred of the Profanity which Wraps Up Error in the Language of Truth

Chapter XXXVI – The Personal Details a Guarantee of Genuineness

Chapter XXXVII – The Apostle Forsaken by Men but Strengthened by the Lord – The Mission to the Gentiles Completed – The Sure Hope, and the Final Hymn of Praise

The following article is now on-line in PDF: Richard E. DeMaris, “Corinthian Religion and Baptism for the Dead (1 Corinthians 15:29): Insights from Archaeology and Anthropology,” Journal of Biblical Literature 114.4 (Winter 1995): 661-682. Click here to read. Dr. DeMaris has asked me to point out that an updated version of this article can be…

I recently digitised a hard-to-find article by F.F. Bruce: F.F. Bruce, “Bishop Westcott and the Classical Tradition,” Spectrum 11 (September 1978): 19-21. [Click to download this article in PDF] Bruce’s thesis in this article is that training in the Classical tradition (typically that of the old Public School in the UK) is essential if one…

William Henry Simcox’s Cambridge Greek Testament for Schools on Revelation is the last of the series I have been able to find in the library of Spurgeon’s College. As you will see from the full list here, I am still working on 3 volumes, all kindly provided by the Library at Sarum College, Salisbury. William…

The Reverend Frank Marshall, the British schoolmaster, cleric and rugby administrator, wrote a whole series of commentaries for students preparing for their University entrance examinations (see here for a list). I am planning to make them all available as and when I gain access to printed copies. My thanks to Book Aid for providing access…

[dropcap]R[/dropcap]ecently I was reading through John Nolland’s commentary on the Gospel of Luke when I came across the following passage. A number of scholars have attempted to support Lukan authorship on the basis of a claim that the medical background of the author was evident in his writing. The argument takes its rise from the…