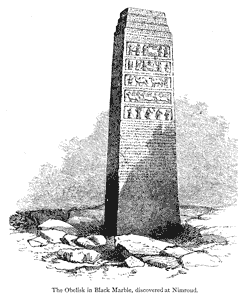 The following public domain book is now available for free download in pdf:

The author carried out excavations in what is now Iraq in the 1840s & 50s, uncovering four palaces of the Assyrian kings, most significantly those of Ashurnasirpal II and Sennacherib. He is also credited with the discovery of the Black Obelisk of Shalmaneser III (shown above). Readers will recognise many of the objects pictured in this remarkable book, including the Black Obelisk, as they can be seen today in the British Museum in London. I have digitised the extensive collection of illustrations sepa 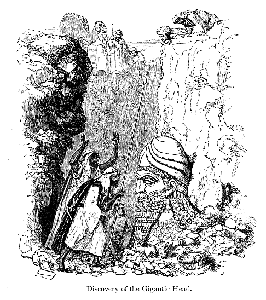 rately so that they can be re-used more easily. This book should be also of interest because many of the places that Layard describes have recently been laid waste (Mosul, for example). We should therefore be doubly grateful to him that so many of the treasures he discovered have long since been removed to places of safety.

Nineveh and its Remains

Preface to the First Edition

The interest felt in the discoveries on the site of Nineveh having been so general, it was suggested to me that an abridgment of my work on ‘Nineveh and its Remains,’ published in a cheap and popular form, would be acceptable to the public. I had already commenced such an abridgment, when I was called away on a second expedition into Assyria, which left me no leisure for literary occupations.
On my return to England, I found that several inaccurate and incomplete accounts of my first researches had already been published. I determined, therefore, to complete without delay the abridged work, which is now presented to the public.
In this abridgment I have omitted the second part of the original work, introducing the principal Biblical and historical illustrations into the narrative, which has thus, I hope, been rendered more useful and complete.
As recent discoveries, and the contents of the inscriptions, as far as they have been satisfactorily decyphered, have confirmed nearly all the opinions expressed in the original work, no changes on any material points have been introduced into this abridgment. I am still inclined to believe that all the ruins explored represent the site of ancient Nineveh, and whilst still assigning the later monuments to the kings mentioned in Scripture, Shalmanezer, Sennacherib, and Esarhaddon, I am convinced that a considerable period elapsed between their foundation and the erection of the older palaces of Nimroud. The results of the attempts to decipher the inscriptions are still too uncertain to authorise the use of any actual names for the earlier kings mentioned in them.

Personally I don’t have any doubts that the Bible provides an accurate historical record of the people and events it describes. Even so, it is nice when someone comes up with yet another piece of hard evidence for this. The evidence doesn’t get any “harder” than than the 2,500 clay tablet discovered recently in the…

I am very pleased to announce that my new website aimed at providing resources for those studying the archaeology of the Bible lands is officially launched today. Over the last few months it became apparent that the range of material relating to archaeology would no longer fit within the structure of the biblicalstudies.org.uk website. The new…