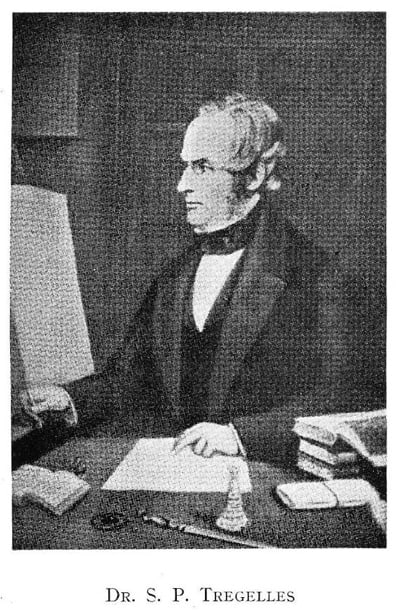 Samuel Prideaux Tregelles (1813 – 1875) is best known today for his critical Greek text of the New Testament. This book provides a summary of his life and work and that of his colleague, B.W. Newton.

F.F. Bruce writes in the Foreword:

I am glad for several reasons to commend the memoir which Mr. Fromow has prepared of B. W. Newton and S. P. Tregelles. One reason is that, as Mr. Fromow has mentioned, some of the material has appeared in The Evangelical Quarterly during my editorship of that periodical.

Another reason is that the name of S. P. Tregelles is one that must always be held in grateful honour by Biblical students for the great work which he did last century on the text of the New Testament. His Greek New Testament is his legacy and monument, and there is no need to enlarge here upon its character and worth. But it is unlikely that Tregelles would ever have begun this work but for the influence which B. W. Newton exercised upon him in his early days; and when at a later date Tregelles was prevented by paralysis from continuing and completing his work, it was Newton who undertook the responsibility of seeing the concluding part through the press. Newton thus merits a share in the gratitude which the world of Biblical learning owes to Tregelles….

My thanks to The Sovereign Grace Advent Testimony for their kind permission to place this book on-line. This title may be downloaded and used for free educational purposes, but not sold for profit without written permission from the copyright holder.

Continuing my series of articles by British Assyriologist Theophilus G. Pinches on Babylon, the following public domain lecture is now available in PDF. Theophilus G. Pinches [1856-1934], “Babylon in the Days of Nebuchadrezzar,” Journal of the Transactions of the Victoria Institute 52 (1920): 178-208. Babylon in the Days of Nebuchadrezzar Of all the many and renowned…

The following Schweich lectures are now available on-line in PDF: Édouard Naville [1844-1926], The Text of the Old Testament. The Schweich Lectures 1915. London: Oxford University Press, 1916. Hbk. pp.82. Please click <<HERE>> for the link. You will find more of the Schweich Lectures available <<HERE>>

Today’s free commentary is J Dyneley Prince’s Commentary on the Book of Daniel, which summarises the conclusions of the Higher Critics about the book. It would be helpful to contrast this with more recent works supporting the book’s historicity, for example this essay by Professor Alan R. Millard and the symposium Notes on Some Problems…