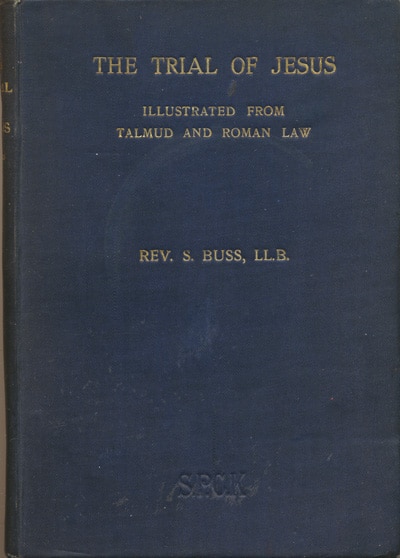 In this fascinating little book Septimus Buss conducts a forensic analysis of the details of the trial of Jesus against their Jewish and Roman background. It would provide a good starting point for a deeper study of the subject. This title is in the public domain.

The death of the Lord Jesus Christ on the Cross of Calvary has been justly regarded as the most momentous event the world ever witnessed. It divides, as by a sharp line, ancient from modern history, The birth of Jesus inaugurated a new era. “His tomb,” says Lamartine, “was the grave of the old world and the cradle of the new.” Certainly no event that ever happened in all history has exercised so vast an influence as this. Whether the death of Jesus be looked at from the orthodox Christian point of view, as the atonement for the sin of the world, and the reconciliation of God and man, – or be regarded coldly as the condemnation of a Just Man who introduced a new and valuable form of ethical teaching,-or be designated merely as the execution of a Mesith, or seducer of the people, no one has ever doubted…

For more resources on the trial of Jesus visit this page.