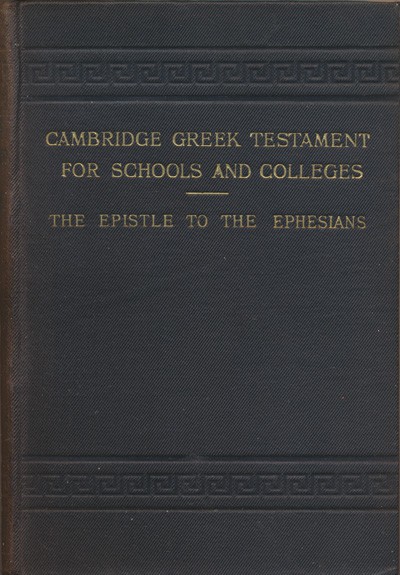 The  Rev J.O.F. Murray [1858-1944] wrote this commentary on the Greek text of Paul’s letter to the Ephesians as part of a series intended for use in the schools and colleges of his day. He was Master of the Selwyn College, Cambridge and Honorary Canon of Ely Cathedral.

This copy of his book was kindly provided by Book Aid and is in the public domain.

Murray also wrote this article on the resurrection:

When five and twenty years ago I first had to prepare a course of public lectures on the Epistle to the Ephesians, I had access, in addition to the generally accessible sources of information, to the notes taken by a College friend at a course of lectures given some years previously in the University by Professor Lightfoot. I asked and obtained permission from him, he was then Bishop of Durham, to make free use of these notes. They are my authority for the views attributed in this edition to ‘ L’ when the reference is not derived from his published works. I owed a great deal at that time to what I learnt both at first and at second hand from him. I trust I have not made him responsible for any opinions which he would have disowned….

Today’s free book is H B Swete’s Commentary on the greek text of the Gospel of Mark. This public domain title was digitised from the copy held in Spurgeon’s College library. I am currently working on several large scanning projects, so from today onwards blog posts will be less frequent. Henry Barclay Swete [1835-1917], The…

Frederic Godet’s 2-volume commentary on Romans is written from an Arminian perspective and is still considered useful. My thanks to Book Aid for making this public domain set available for digitisation. Frédéric Louis Godet [1812-1900], Commentary on St. Paul’s Epistle to the Romans, 2 Vols. Edinburgh: T & T Clark, 1881-82. Hbk. pp.446+434. [Click to…

This is a short commentary on the letters of 1 & 2 Timothy and Titus intended for use in Schools and Colleges. The author argues strongly for Pauline authorship in what appears to be a very useful introduction. My thanks to Book Aid for making available a copy of this public domain title for digitisation….