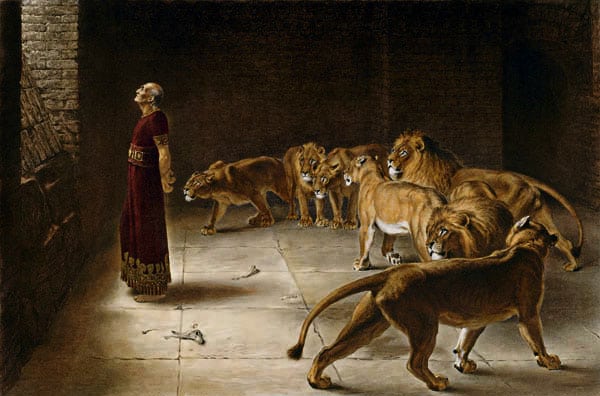 Sir Robert Anderson [1841-1918] was an Assistant Commissioner of the London Metropolitan Police and member of the Open Brethren. In 1885 he wrote this response to F.W. Farrar, then the Dean of Canterbury, who had recently written a commentary on the Book of Daniel in The Expositor’s Bible series. Farrar roundly dismissed the historical claims of that book, so Anderson countered with this defence of a 7th Century dating of Daniel.

This title has been widely republished both in print and on-line, but as I came across a copy at Book Aid I thought it would do not harm to make is available here as well. My thanks to Book Aid for their assistance.

Bv “all people of discernment” the “Higher Criticism” is now held in the greatest repute. And discernment is a quality for which the dullest of men are keen to claim credit. It may safely be assumed that not one person in a score of those who eagerly disclaim belief in the visions of Daniel has ever seriously considered the question. The literature upon the subject is but dull reading at best, and the inquiry demands a combination of qualities which is comparatively rare. A newspaper review of some ponderous treatise, or a frothy discourse by some popular preacher, will satisfy most men. The German literature upon the controversy they know nothing of, and the writings of scholars like Professor Driver of Oxford are by no means to their taste, and probably beyond their capacity. Dean Farrar’s Book of Daniel will therefore supply a much – felt want…

More resources on Daniel can be found here. Of these Alan R. Millard’s recent defence of the book’s historicity is especially helpful.

In this series of ad hoc articles Sir William Ramsay defends the historicity of the New Testament against the arguments put forward by Dr James Moffatt. Ramsay was not the first to respond to Moffatt’s attacks on historicity, see Daniel in the Critic’s Den, for another example. My thanks to Book Aid for making a…

Today’s free commentary is J Dyneley Prince’s Commentary on the Book of Daniel, which summarises the conclusions of the Higher Critics about the book. It would be helpful to contrast this with more recent works supporting the book’s historicity, for example this essay by Professor Alan R. Millard and the symposium Notes on Some Problems…

This year’s issue of the Caribbean Journal of Evangelical Theology is now available on-line for free download in PDF. It has articles on the small horn or Daniel chapter 7 & 8, a rhetorical reading of 1 Corinthians 11:1-16 and theologies of both servanthood and the environment, plus several book reviews. Please visit the journal’s home page…