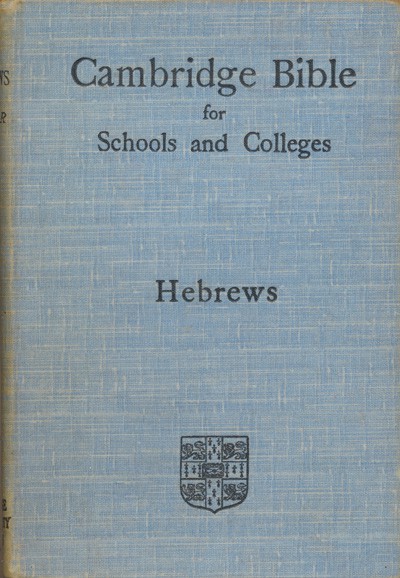 F.W. Farrar, latterly Dean of Canterbury Cathedral, is probably best known of his Life of Christ (1874). The title is somewhat misleading, being taken from title given to the letter by the KJV and Revised Version. In fact, Farrar argues at length that Apollos, rather than Paul, is the best known authorial candidate (see extract below).

Frederic William Farrar [1831-1903], The Epistle of Paul the Apostle to the Hebrews. The Cambridge Bible for Schools and Colleges. Cambridge: Cambridge University Press, 1902. Hbk. pp.196. [Click to visit the download page]

Apollos meets every one of the necessary requirements. (1) He was a Jew. (2) He was a Hellenist. (3) He was an Alexandrian. (4) He was famed for his eloquence and his powerful method of applying Scripture. (5) He was a friend of Timotheus (6) He had ·acquired considerable authority in various Churches. (7) He had been taught b· an Apostle. (8) He was of the School of St Paul; yet (9) he adopted an independent line of his own (1 Cor. iii. 6). (10) We have no trace that he was ever at Jerusalem; and yet, we may add to the above considerations, that his style of argument-like that of the writer of this Epistle was specially effective as addressed to Jewish hearers. The writer’s boldness of tone (Acts xviii. 26) and his modest self-suppression (1 Cor. xvi. 12) also point to Apollos. The various allusions to Apollos are found in Acts xviii. 24-28; 1 Cor. iii. 4-6, xvi. 12; Tit. iii. 13; and in every single particular they agree with such remarkable cogency in indicating to us a Christian whose powers, whose training, whose character, and whose entire circumstances would have marked him out as a man likely to have written such a treatise as the one before us, that we may safely arrive at the conclusion either that AP0LLOS wrote the Epistle or that it is the work of some author who is to us entirely unknown.

Today’s free book is Robert Buchanan’s commentary on the book of Ecclesiates. This public domain title was digitised using the copy of the book held in Spurgeon’s College Library. Robert Buchanan [1802-1875], The Book of Ecclesiastes. Its Meaning and Its Lessons. London: Blackie & Son, 1859. Hbk. pp.435. [Click here to visit the download page…

Carl Friedrich Keil and Franz Delitzsch were 19th Century German Lutheran theologians. Their commentaries are conservative and express their conviction of the divine authority and inspiration of the whole Old Testament. My thanks to Book Aid for making a copy of this book available for digitisation. This title is in the public domain. Carl Friedrich…

Today’s free book is Sir William Ramsay’s classic study of the letters to the seven churches of Asia in the book of Revelation. Ramsay examines the historical context of each of the cities and applies this to the interpretation of the letters. My thanks to Book Aid for providing a copy of this public domain…

The following public domain commentary on 2 Corinthians is now available in pdf: Alfred Plummer [1841–1926], A Critical and Exegetical Commentary on the Second Epistle of Paul to the Corinthians. Edinburgh: T &T Clark, 1915. Hbk. pp.404. Don Carson notes in his New Testament Commentary Survey (6th edn.), that this commentary: “…tends to be pedestrian, but is…

This is Charles Fox Burney’s 1918 commentary on the book of Judges, complete with colour maps and greyscale plates. This title is in the public domain. Charles Fox Burney [1868-1925], editor, The Book of Judges with Introduction and Notes. London: Rivingtons. 1918. Hbk. pp.528. [Click to visit the download page] Table of Contents Preface Addenda…