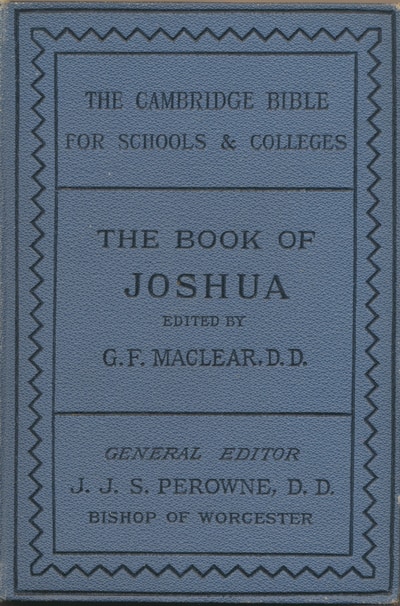 1. The Pentateuch is followed in the Jewish Canon by a series which bears the name of Neviim Rishonim, “the earlier Prophets 1”, and comprises Joshua, Judges, the first and second Books of Samuel, and the two Books of Kings. This series contains the history of the Israelites,

(a) As governed by the successor of Moses and the elders who outlived him;

(b) As governed by native kings;

(c) As subject to foreign invaders.

2. The first of these Books, the Book of Joshua, derives its name, not from its Author, but from the great hero, whose exploits are therein related, and who succeeded to the command of the people after the death of the great Hebrew Lawgiver, and led the nation into the Promised Land.

3. The claims of the Book to a place in the Canon of the Old Testament have never been disputed, and its authority is confirmed by allusions to the events recorded in it, which are found in other Books of Holy Scripture. [Continue reading]

More resources on the book of Joshua can be found here

This is a commentary on the book of Revelation in The Pulpit Commentary series by Alfred Plummer. It presented difficulties in scanning because of the very poor quality of the paper used. My previous scanner was unequal to the challenge, but my new one has at least provided a readable result, even if it is…

According to F.F. Bruce this is the best of Bishop Brooke Foss Westcott’s commentaries. My thanks to Book Aid for providing a copy for digitisation. This title is in the public domain. Brooke Foss Westcott [1825-1901], The Gospel According to John: The Authorised Version with Introduction and Notes. London: John Murray, 1894. Hbk. pp.307. [Click…

The positive response I received to my recent uploading of the volume on John in the Cambridge Greek Testament series has encouraged me to press ahead with the digitisation of this series. I get the impression that the series is little known outside of the United Kingdom as they are not widely available online yet,…