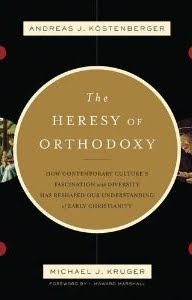 This is a timely work for those wishing to answer the stream of recent books and articles arguing that we cannot know what the first followers of Jesus actually believed. What we can be sure of – writers such as Bart Ehrman assure us – is that the Church in the third and fourth centuries imposed is own interpretation of Jesus and suppressed the earlier “original” Christianity – which is now lost forever. As fictional as this interpretation of history might be it does require a considerable amount of time and effort to refute. I for one and very grateful for Köstenberger & Kruger for doing so in this volume.
The book is divided into three sections, answering in turn the three assertions of the Bauer-Ehrman hypothesis. Section 1 asks what is the evidence for a plurality of “Christianities” vying for supremacy in the early church. Drawing on some superb recent research by Richard Bauckham (Jesus and the Eyewitnesses), Larry Hurtado (Lord Jesus Christ: Devotion to Jesus in Earliest Christianity – now sadly out of print) and others, the authors make a convincing case that there was substantial and very early unity in the church about central issues of faith. Section 2 answers the issues of whether the later church decided which books were canonical in order to exclude “true Christianity” from the church. It demonstrates that the concept of “canon” is found within the New Testament itself and that even before the NT was complete parts of it were being recognised by apostolic witnesses as being of equal or greater authority than the Old Testament scriptures. Although a small number of books were still disputed until fairly late on, the core of the NT was very quickly accepted as Scripture. The third and fourth century church did not therefore invent the canon, they simply listed those books that had already been recognised as being authoritative.
The third and final section turns to the subject of textual criticism and focuses quite narrowly on how texts were copied in the ancient world and whether it was possible for a theological change made by a scribe could have become universally accepted without modern textual critics being able to identify it. Because of the vast number of NT manuscripts available and the speed in which they were disseminated throught the Empire we now know that this sort of theological change would have been impossible.
This book would prove a valuable addition to the library of anyone involved in apologetics today and anyone starting a theology course this Autumn. Some knowledge of early church history would be helpful, but not essential, as the authors do their best to explain who the characters they discuss are. It is a masterpiece of summarisation and deserves a wide readership.

I would like to leave the last word to D.A. Carson, who writes on the back cover:

In the beginning was Diversity. And the Diversity was with God, and the Diversity was God. Without Diversity was nothing made that has been made. And it came to pass that nasty old ‘orthodox’ people narrowed down diversity and finally squeezed it out, dismissing it as heresy. But in the fullness of time (which is of course our time). Diversity rose up and smote orthodoxy hip and thigh. Now, praise be, the only heresy is orthodoxy…

Edited by Johnson Thomaskutty & Mathew Chansdrankunnel CMI Associate Editors: RSV Sukumar Babu & Thangminlun Vaiphei A Brief Description of the Book The current edited volume entitled Wider Contextualized Biblical Spirituality is ecumenical in nature as the authors attempt to interpret the Biblical narratives and the extra-Biblical documents from multiple vantage points and suggest a…

A Brief Review of the Book The Fourth Gospel functions as a literary masterpiece that facilitates a narrative beyond the time and space aspects. The Gospel’s linguistic phenomena and stylistic aspects are peculiar as they attune the attention of the reader toward a dramatic and ideological world of its own. The connection between the narrator… 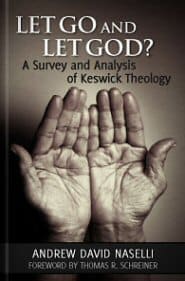 I love reading Ph.D. Theses and so I was delighted when Andy Naselli sent me a copy of his to review. Naselli’s thesis – Let Go and Let God – is a historical and theological analysis / critique of the theology of the Early Keswick movement. For those who are not familiar with this –…

It is not often I recommend a book that book that retails new at £120, but when this one landed on the sorting table a Book Aid last week I thought its contents significant enough to do so. James H. Charlesworth with Jolyon G.R. Pruszinski, editors, Jesus Research. The Gospel of John in Historical Enquiry….

Dr Tom Holland has asked me to announce the imminent publication of his evaluation of the theology of N.T. Wright: Tom Wright and the Search for Truth: A Theological Evaluation I have long felt that someone ought to write a comprehensive, probing critique of N. T. Wright’s theological thought. I’m very grateful to Tom Holland…